Best Ski Tours and Ski Safaris in the Alps

For an experience to remember, there is nothing better than venturing in to pristine natural wilderness armed with your skis and exploring the back-country high alpine routes.

There are many classic tours such as the famous Haute Route between Chamonix and Zermatt but also not that well know but equally good. A tour can last anything from a day up to a week and sometimes longer in which case you stay in one of the pre-booked mountain huts.

This guided ski tour is one of the classics. Starting at St Moritz in the Engadin Valley, the route initially takes you towards the Suvretta pass and on to Chamanna Jenatsch.

From there, you will encounter numerous glaciers such as Laviner, Grialetsch and Vallorgia before the final descent in to Davos via the Dischmatal valley.

This ski tour is virtually lift-less so a good level of fitness is required to scale the many peaks using skins, ropes and crampons in some cases - one of the best ski tours in the Alps. 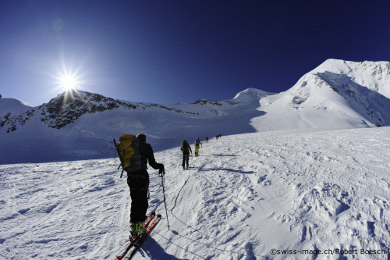 
One of the most famous descents in the world, this full day 22km unmarked and unpatrolled trail begins at 3842m from the top of the Aiguille du Midi lift station from where the panoramic views of Monte Rosa and the Matterhorn take some beating.

After negotiating a 40m ridge carrying skis in one hand and holding on to the rope with the other, you arrive at the start of one of the most scenic itineraries in the world with large séracs, crevasses and ice falls in every direction.

After 4 hours or so, you arrive at Montenvers where there is a cafe and ice caves in the glacier. From here, you can ski back down to Chamonix (snow permitting) or takes the scenic train ride back to the centre.


This circuit is within the impressive Dolomiti Super Ski region of the Italian Dolomites and home to famous resorts such as Cortina and the beautiful Val Gardena.

The 24km tour takes place around the Sella Massif and can be easily accessed by any of the ski resorts in eithr Val Gardena, Alta Badia, Val di Fassa and Arabba / Marmolada.

The tour is for intermediate skiers and above although many slopes can be tackled by good beginners. As for fitness, its not that kind of safari so a moderate level of fitness will surfice. The scenery is spectacular and the mountain restaurants around the circuit are out of this world.


For a long ski tour, the Haute Route from Chamonix to Zermatt is very popular normally taking 6 days where you spend the evenings in mountain huts.

Starting at Grands Montets above Argentière at the top of the Chamonix Valley, the route takes you through 120km of some of the most spectacular scenery in the Alps, passing through the chic resort of Verbier in the 4 Valleys along the way.

The route covers 6000m of ascent and descent so a high level of fitness is required!

This classic is the ultimate guided ski tour of a lifetime. 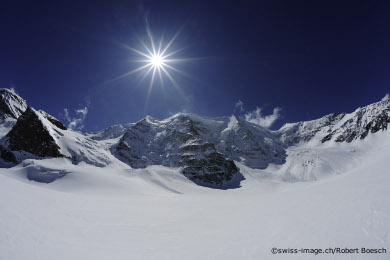 
This ski safari is viewed by many alpine tourers as on a par with the Chamonix to Zermatt Haute Route. The starting point is the pretty Swiss resort of Villars and finishing in Kandersteg in the next valley from Leukerbad. However, the route can be accessed along the way via Les Diablerets and Gstaad.

From Villars, its a gentle ski over to the Glacier 3000 lift and then it starts to get interesting. The tour takes you up to Arpelistock (3035m), across the Tungel glacier and there are some teriffic long off-piste sections.

The ski tour includes overnights stays in the Wildhorn, Wildstrubel and Lammerenhutte huts before the final ascent to the summit of the Roter Tot at 2850m. From the top, its an incredible 1600m descent in to the pretty village of Kenderstag. 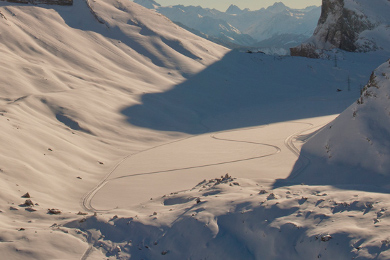 
Starting at the Jungfraujoch, the beauty of this tour is that it can be as long or as short as you want it to be.

It typically starts by climbing Trugberg at 3880m from where there is a lovely descent to the Kinkordia hut. This can be used as a base for a number of days giving you time to try different trails.

Further afield, via the Aletsch glacier, you will spend a night in the Mittelaletsch hut and then climb the Aletschhorn at 4193m for more off-piste magic. The final ascent is on the Lotschentaler Breithorn at 3785m that gives a massive 2km descent in to Mund before taking the bus back to Grindelwald 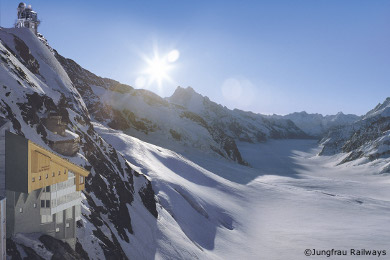 
Whilst there are many variations to the classic route, most tours start by an ascent to Piz Davo Sass from where you ski down to the Heidelberger Hut for your first night. Day 2 can involve a number of different ascents such as the Breite Krone at 3079m before heading to the Jamtal Hut.

As the tour arcs around over the Ochsentaler, over the Vermunt glacier and via the Wiesdadener Hut for another overnighter, the final ascent is the Rauherkopf from where you ski the long trail down to Galtur and get the bus back to Ischgl. 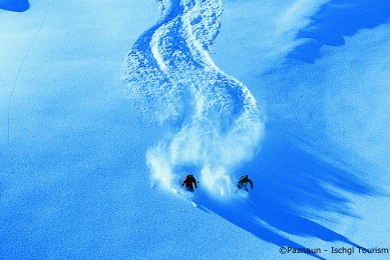