Ski holidays in La Tania - the most recent addition to the ski resorts in the Three Valleys, France and much-loved by the Brits. Created in 1990 in advance of the 1992 Albertville Winter Olympics to house athletes and journalists, the resort has since developed into a small, but really friendly resort that is also proud to be car-free.

The main advantage of La Tania is that it offers quick access to the main skiing areas between Courchevel and Meribel, yet you dont have to be a Russian oligarch to afford to stay there. The resort is just 2km from Le Praz (part of Courchevel) and 5km from Meribel by road, whilst a transfer from nearest airport Chambery will take around a hour.

Ever since opening its doors on the 22 December 1990, La Tania has been a popular base for skiers and boarders.

The ski resort sits at 1350m and whilst this is not that high, the slopes leading back to the village are north facing, so tend to hold their snow quite well.

One thing to note about skiing in La Tania is that you dont really! The La Tania bubble lift is the main access up to the mid station at 1867m and then, via its one chairlift (Dou des Louches) to the ridge before entering the Courchevel ski area that connects to Meribel. 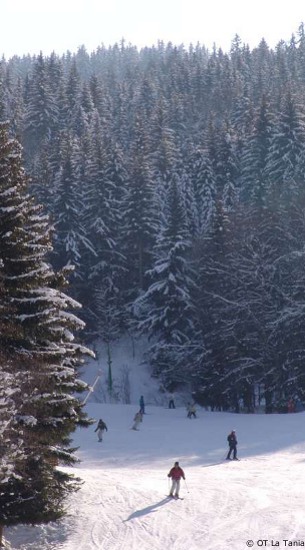 For kids and absolute beginners, there are mini draglifts at the snowfront that are free. This is also where the French ski school ESF has its office and meeting points, although there are also several independent ski schools in La Tania that also have excellent reputations.

If youre an intermediate skier or boarder the world of La Tania is truly your oyster. If you want to head to the furthest point of the Three Valleys, count on clocking up around 30 miles of skiing going to Orelle past Val Thorens and back again in a day, just make sure you dont miss that last lift back. There are regular-ish buses back to La Tania from all stations at Courchevel though.

Our top tip for skiing in La Tania is to get up and out early. If youre on a first lift mission, make sure you have a early morning blast back down the blue Fouyeres home run, this wide piste with bumps and turns back to resort is simply superb when its fresh corduroy and before its been skied out.

If youre a powder hound, some of the best spots local to La Tania are from the Col de Loze, between the Gasex avalanche explosives pipes (and yes, it as an avalanche risk zone so make sure youre equipped and know what youre doing) and back down to the Dou des Louches chair. There are also options off the back into the Meribel side of the valley. If its snowing heavily, we like a few runs in the trees off the Boulevard des Arolles.

There are about 33km in the Méribel valley. The main area is in the forest near Altiport and great for trying cross-country for the first time. There’s also a loop around Lake Tueda, in the nature reserve at Mottaret, and for the more experienced an itinéraire from Altiport to Courchevel.

Beginners are well catered for now as lots of the old drags around Les 3 Vallees having been upgraded to chairlifts. There are several terrain parks to try out in nearby Courchevel and Meribel.

For those days where you simply dont want to put skis on or the weather conditions aren't that great, there are plenty of other outdoor activities to hand:

La Tania has a relaxed apres-ski scene with some lively bars as in most ski resorts. There are plenty of restaurants that serve a wide variety of cuisine ranging from hearty local specialities to fine gourmet dishes from Europe and around the world.

Being a very family friendly resort, La Tania looks after the youngsters extremely well with a good choice of KindergartenLa, Au pair and Creche.

There are many spa and wellness facilities in the resort offering various treatments, swimming, saunas, steam room, hammam, jacuzzi, Turkish showers and solarium.

We love La Tania for its friendly, fun and practical aspects. Access to one of the most famous domains in the world is easy, yet you won't have to pay a fortune to stay there. La Tania is often described as a family resort, but we know there is a whole lot more to this gem than that. There's enough to keep everyone happy and entertained from keen après-skiers to little ones learning to ski for the first time.

Some of our favourite hidden gems of La Tania include...