Originally a Berber settlement, Oukaimeden (pronounced "u-ki-meden") was first developed as a ski destination by the French colonialists in 1936. It wasnt until 1953 that ski lifts were built along with some hotels and other dwellings. Infrastructure and communication followed in the 1960s allowing the tourists and locals of Marrakech to try out the "white stuff" for fun and sport.

Oukaimeden has been developing ever since but is not quite on the radar of many Westerners as a ski destination - just yet! This is all about to change with a multi-billion dollar project underway to transform the resort into a year round destination with 11 new luxury hotels and some 300 retail units including the world's highest golf course. The ski area will also get a major revamp and is to include snow cannons that are due to be in operation by 2015.

The après-ski in Oukaimeden is relaxed and focuses on the food rather than the late night clubs. There are a copule of pizzerias, several other restaurants and a nightclub.

At 3268m Oukaimden is the highest ski resort in Africa, and is stunningly beautiful with skiing between 2600m and 3258m. The environment is rocky with no pine forests for rabbit runs so you need to take extra care if the snow cover is thin.

If you haven't brought your own gear then the ski hire shops offer reasonably well-maintained skis and boots for a fraction of the cost of main stream resorts but don't expect to see the latest models!

There are several nursery slopes serviced by drag-lifts that take beginners to the top of a reasonably well-groomed snowfield.

The longest run is 3km and none of the runs from the top of the main chairlift are easy, complicated by the fact that there are vew few obvious boundaries as to where the edge of the piste actually stops! The main runs are Grande Combe (a steep mogul-field) or Pistes des Mouflons, which is dotted with huge boulders.

So, it could be argued, you need to be a good intermediate for these runs. Hiring a local guide would be useful as for one, they know where not to go! and secondly, they offer other mountain activities such as ski-touring and snow shoeing.

For the expert skier - there are really only two options which are to hire a guide and go touring or go heli-skiing.

The drops allowed by the Moroccan authorities are from the top of Toubkal in the southwest and the Bou Iguenouane northeast. The terrain has varied descents including steep slopes, couloirs, valleys. One of the main companies that arrange heli-skiing, including accommodation is Evolution2.

When there is good snow cover, snowboarders will enjoy the off-piste terrain as there are plenty of options but dont expect to practice any tricks in the snowparks - there arent any. To get the best out of these mountains, heli-boarding is the option to go for.

Oukaimeden offers more than just skiing. There is a big sledging area for families to have a bit of fun but there is also plenty of activities to try off the slopes... 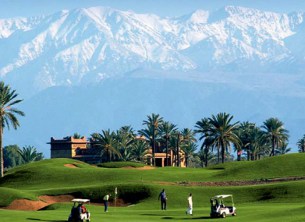 However, many people tend to base themselves in Marrakech and make the daily commute up to the resort. Marrakech has some fantastic luxury villas and apartments to rent both in and around the city.

Our view on ski holidays in Oukaimden

If you are thinking of going to Marrakesh for some winter sun then we would also suggest a few days on the slopes in Oukaimeden. The real adventure is the back-country touring possibilities and that's when the heli-skiing thrills start....

If you like Oukaimeden - something different, authentic and unspoilt, then also worth looking at is Riksgransen in Sweden. This is the most northerly ski resort in the world!