How to get to Campitello di Fassa


How to get to Campitello di Fassa

The closest airport to Campitello is Bolzano but has limited international flights so the best option is to fly in to Innsbruck and hire a car, get a bus or airport transfer. Airport transfers from Innsbruck take around 90 minutes and have you driving through stunning alpine scenery with the mighty Dolomiti peaks looking down.

On Saturdays and Sundays (from December to April), a bus transfer service called "Fly Ski Shuttle" connects the airports of Verona, Bergamo and Venice to Val di Fassa (www.trentinoviaggi.net)

If you are driving for your ski holidays in Campitello from the A22 Brenner motorway, then...

If you are coming by train, the closest stations to Campitello di Fassa are... 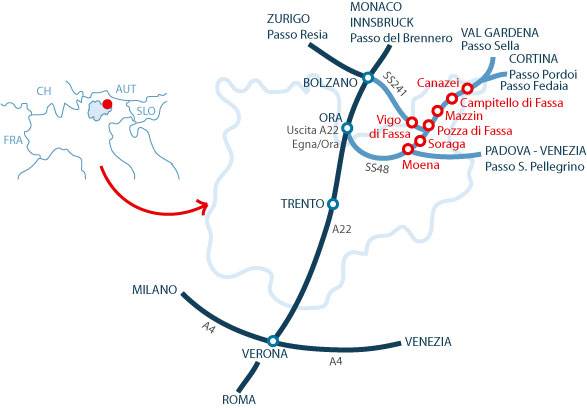