How to get to Kitzbuhel

How to get to Kitzbuhel

Situated in Western Austria in the middle of the Tyrolean Alps, Kitzbühel is within easy reach of 3 international airports and has direct train links with Innsbruck airport.

Airport transfers from Salzburg to Kitzbühel take around 60 minutes depending upon the traffic and weather conditions. Alternatively, Innsbruck is just 95km away or there is Munich with a distance of 125km. With airport transfer times under 2 hours from these airports, and with most of the journey via motorway, getting to Kitzbühel is straightforward and hassle free.

If you are travelling by car, the main route is to head for Salzburg and follow the signs to Lofer then Kitzbühel. Don't forget to buy the Austrian road tax sticker "Vignette" as it's against the law to drive on the motorways without one. You can buy one at the border or at petrol stations. There are 3 type of sticker: 10-days, 2-months and 1-year.

Travelling by train for your ski holidays in Kitzbühel, then the closest station is Kitzbühel!!! Austrian Railways run a network of trains, which stop several times daily at Kitzbühel plus all international express trains from Germany stop here as well. 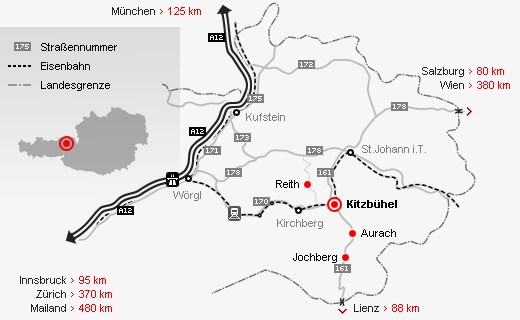