Sitting at 1655m in the Pyrénées Orientale, the old traditional village of Les Angles lies in the foothills of the Massif Llaret and is the highest village on the Capcir Plateau.

The village dates back to 966 so is rich in history and Catalan culture but it wasn't until 1964 that the town opened its doors for skiing. There has been no looking back and the resort has been growing in popularity ever since.

The village comes to life as skiers return from the slopes, with several shops, restaurants, cafes, bars and the tartane nightclub. Being close to the Spanish border means Les Angles is a melting pot of Iberian and south-eastern French cultures which make the evenings very lively. 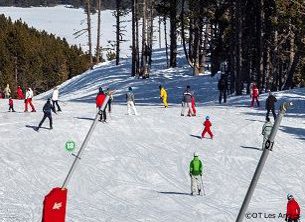 The skiing area has 55km of runs for skiers of all abilities with the highest lift topping out at 2400m providing 800m of vertical back to the village.

Whilst one of the largest ski areas in the Eastern Pyrenees, with 45 varied trails from the mountain pine forrest runs to the wide open pistes further up, the pisted ski area is fairly limited. However, there are some excellent off piste ski tours around the the majestic peaks of Pérics (2820m) and Madras. 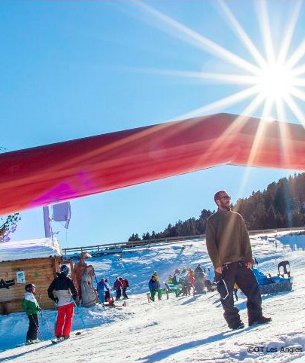 First time skiers are in for a treat as Les Angles has 14 green runs and 9 blue ones that are spread from the top to the bottom of the mountain.

With 14 red pistes, intermediate skiers and boarders have enough terrain to explore for a few days but after that, its the off-piste that will keep you entertained. The main sectors for intermediates are Jassettes and Balcere with some stunning trails through the pine forests.

The majority of the terrain caters for beginners and intermediate skiers with only 8 black pistes - the best being in the Espace Costa Verde sector. However, the off-piste is very good and there are many ski tours that can be booked through the ski schools where a guide will escourt you.

Les Angles has a small snowboard / terrain park that caters for beginners through to experts.

There are 36kms of beautiful trails that wind through the Capcir forests - its the perfect way to get away and experience the pristine natural beauty and silence.

Les Angles is a compact resort and most of the holiday rentals are within a short walk to the centre and ski lifts. However, there are some new chalet style developments further up the mountain which are serviced by a free shuttle bus that runs 8 times a day. The advantage of these newer chalets and apartments is that they back on to the slopes which means you can often ski back to your front door. 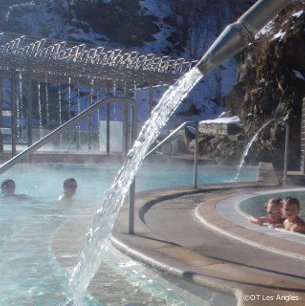 Les Angles is known for its excellent facilities and services for families. Many of these are based at the ESF Piou-Piou Club where children from the age of 3 can learn to ski.

Les Angles provide some mouth watering activities other than skiing such as...

Our view on Les Angles

Outside of France, Les angles is off the grid for most skiers and boarders which means there is definitely that authentic and traditional village feel. With an excellent snow record, pristine pistes and first class family services and facilities, Les Angles is a refreshing change to the mass tourist resorts around Haute Savoie and the Tarentaise valley.