Corvara is a pretty ski resort in the sunny Alta Badia valley surrounded by gentle slopes and green forests overlooked by the Dolomites. It is the largest and most cosmopolitan ski resort in Alta Badia and being in the South Tyrol, the first language is Ladin closely followed by Italian and German.

Ladin is a Neolatin language that is also spoken in other valleys surrounding the Sella Massif including Val Gardena, Livinallongo, Val di Fassa and Ampezzo.

Corvara has a lively apres-ski scene with a good selection of bars and restaurants. The "Tea Dance" party at the Post Hotel is a firm favourite where people go to dance in their ski boots.

And, throughout Alta Badia, the valley is a paradise for those who love their food. There are 4 Michelin-starred restaurants and the dishes combine South Tyrolean and Italian cuisine with local Ladin specialities.

As is typical throughout Italy, kids are worshipped and Corvara is no exception with miniclubs and daycare centres for the younger ones up to the age of 11.

The local ski area of Corvara gives plenty of opportunities for beginners and early intermediates to improve their technique before heading out into the vast ski terrain covered by the Super Dolomiti pass delivering some 1220km of pistes (1100km have snow-making machines) of which 30% are Blue / Green, 60% Red and 10% Black. The Dolomiti Superski ski pass provides access to 460 lifts and 1,220 km of pistes in the following ski areas: Cortina d'Ampezzo, Kronplatz, Alta Badia, Gröden, Seiseralm, Fassatal, Karersee, Arabba, Marmolada, Hochpustertal, Fleimstal, Obereggen, San Martino di Castrozza-Rollepass, Eisacktal, Trevalli and Civetta.

The nursery slopes at Corvara are accessible from the town centre and after you have managed to get the snowplough turns perfected, there are lots of wide easy cruising blues in every direction to progress your technique.

For the intermediates, the local and entire Super Dolomiti area is heaven with literally miles and miles of piste at your finger tips. One of the best days out is to ski the Sella Ronda - it can take up to a full day depending on your ability, fitness and the number of pit-stops but definitely worth it.

The local area is pretty limited for the serious skiers although there are some good off-piste runs under La Villa's Piz La Ila gondola and under the Vallon chairlift.


If you head over to Val Gardena in the direction of Ciampinoi / Sassolungo between Selva and S. Cristina, there are some challenging runs and certainly some of the best off-piste closest to La Villa, where we would recommend you take a guide to get the best out of what is available.

In addition to skiing, other winter activities include...

Further afield, its definitely worth the trip to Arabba via the Podroi Pass. Arraba has the most blacks around the Sella Ronda circuit and from there, time permitting, skiing on the Marmolda is not to be missed. From Arabba it takes around 40 mins skiing to the base cable car and then a further 2 cable cars to get to the top. The best known run is the Bellunese from Punta Rocca at 3300m down to Malga Ciapela, a vertical drop of 1800m and some 12km long - truly amazing and stunning scenery all the way.

Corvara has been growing in popularity in recent years as the word is getting out that the Dolomites are great value for money and offer unparalleled ski touring opportunities and summer sports. As a result, there has been a steady stream of new developments coming to market in and around the town centre ranging from new chalets to luxury apartment residences.

Our view on Corvara

We think Corvara is the ideal base for ski holidays in the Dolomites with so many touring options available and some fantastic places to vist. A few suggestions... 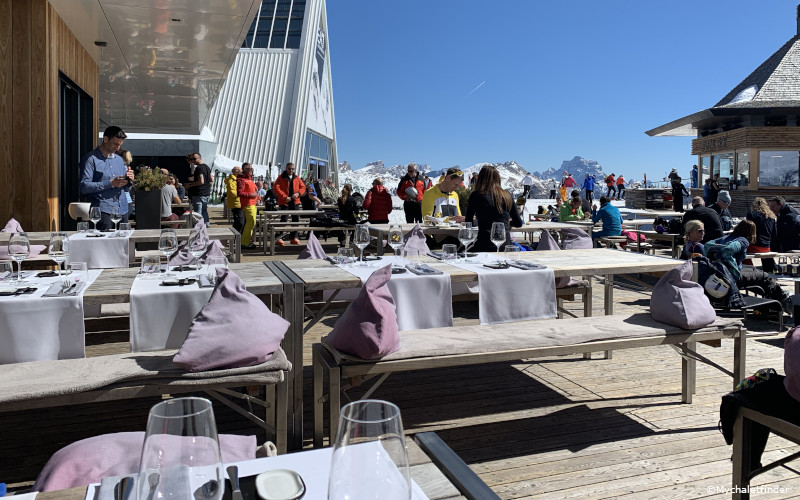