Ski holidays in Hauteluce - a little gem of a ski resort sitting in between the Col des Saisies in the west and the Col du Joly in the east under the gaze of the Mont Blanc Massif.

Surrounded by mountain peaks and pine forests and just 30km from Albertville, Hauteluce is a family ski resort with a laidback atmosphere.

In Hauteluce, there are several good standard restaurants serving largely local dishes from around Savoie and Haute Savoie. In terms of the bar scene, there are a couple of local bars but don't expect a Bavarian style "kness-up" party scene - Hauteluce is more relaxed and informal.

There are several good spas and wellness centers in nearby Les Saisies that have the usual facilities you would expect in a well equipped ski resort including pools, saunas and various treatments.

If you're looking for a family friendly ski resort, Hauteluce is an ideal choice. It is part of the Espace Diamant ski area which was created in 2006 when the ski resorts of....

...were linked and together provide 185km of pistes, 87 lifts and 120km of cross country skiing. There is direct access to the ski area via the Chozal chairlift or a free ski shuttle bus service for access to Les Saisies.

The outer reaches of the area spread to Praz sur Arly which you can get to by going over the back side of Mont Vores or La Legette to Les Saisies and skiing down towards Crest Voland. At the other end of Hauteluce, there is access to Les Contamines which is linked in to the Evasion Mont Blanc carousel providing a huge 445km of linked pistes. 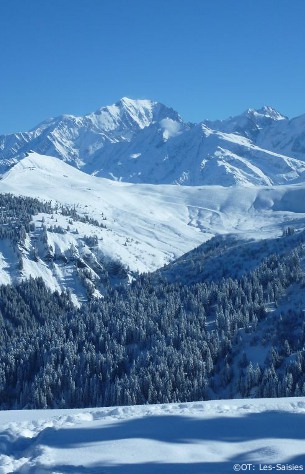 Hauteluce is a great resort if you are starting out for the first time. Lots of wide greens and blues in the Les Saisies sector will get you touring around in no time.

Intermediate skiing is what the Espace Diamant circuit is all about and we can heartily recommend the pistes around the Mont Lachet and Les Saisies areas. It's also really easy to move around the linked ski resorts so you can start the morning and go exploring.

Hauteluce and the whole Espace Diamant area is not known as a mecca for the expert skier and does not have a reputation for serious off piste, but search a little bit and you will find that secret stash of powder in the Les Saisies sector down towards Chard du Beurre and through the trees.

Any young freestylers will love the various snow parks around the carousel such as Waouland (Boarder Cross) over at Cohennoz / Crest-Voland.

Hauteluce is often in the shadow of neighbouring heavyweight resorts such as Megeve, but little old Hauteluce deserves to be in the spotlight as a fantastic destination for families who want easy access to the resort, extensive piste skiing with stunning views of Mont Blanc and good facilities for all.

One of the most famous year round spectacles in the area is hot air ballooning in Les Saisies - this is a week-long festival held in January and the chance for you to take a ride!

Similar resorts to Hauteluce include Valloire and Val Cenis Vanoise.