La Villa sits at 1433m in the middle of the Alta Badia Valley at the foot of Gardenazza and Piz La Ila. Every December, La Villa hosts the Ski Worldcup Giant Slalom on the “Gran Risa” ski slope which turns the normally quiet village in to a bustling ski resort. Families with children come back year after year due to the ski kindergartens and many supervised activities for the kids.

Being in the South Tyrol, the first language in the Val Badia valley is Ladin closely followed by Italian and German. Ladin is a Neolatin language that is also spoken in other valleys surrounding the Sella Massif ( Val Gardena, Livinallongo, Val di Fassa and Ampezzo).

Alta Badia is a paradise for those who love their food. Their are 4 Michelin-starred restaurants and the dishes combine South Tyrolean and Italian cuisine with local Ladin specialities. Compared to Corvara and Colfosco which are the liveliest villages in Alta Badia, La Villa offers a more quite and sophisticated après-ski. Having said that, La Bercia (bar and pizzeria) gets packed at night with the club staying open until the early hours.

This skiing area is known throughout the world, not only due to the unique landscape in which it is part of, but also due to the state-of-the-art lift facilites. In the valley of Badia there are 51 ski lifts, 130km of pistes and 38km of cross country slopes. The famous Gran Risa ski run can be found in La Villa, well known for its World Cup Slalom race. The lovely Valley of the Stella Alpine can be reached from the village of Colfosco and you can admire the breathtaking view of the Valley of Mezdi. From here you can start a magnificent all day ski tour to Lagazuoi. The Sella Ronda also takes you to Corvara and Colfosco and you can easily reach the adjacent valleys.

The local ski area around Alta Badia gives plenty of opportunities for beginners and early intermediates to improve their technique before heading out into the vast ski terrain covered by the Super Dolomiti pass that gives access to some 1220km of pistes!! 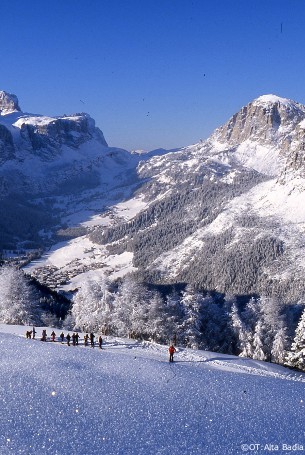 La Villa's nursery slopes are accessible from the town centre and after you have managed to get the snowplough turns perfected, there are lots of wide easy cruising blues in every direction to progress your technique.

For the intermediates, the local and entire Super Dolomiti area is heaven with literally miles and miles of piste at your finger tips. One of the best days out is to ski the Sella Ronda - it can take up to a full day depending on your ability, fitness and the number of pit-stops but definitely worth it.

The local area is pretty limited for the serious skiers although there are some good off-piste runs under La Villa's Piz La Ila gondola and under the Vallon chairlift.

If you head over to Val Gardena in the direction of Ciampinoi / Sassolungo between Selva and S. Cristina, there are some challenging runs and certainly some of the best off-piste closest to La Villa, where we would recommend you take a guide to get the best out of what is available.

The self catering holiday rentals in and around La Villa are all close to the main street leading up to the gondala so you are never to far away from the shops, bars and restaurants. No matter what type of accommodation you choose, you can be sure that they are all extremely welcoming, friendly and exceptional value for money.

Things to see & do in and around La Villa

In addition to skiing and other mountain sports such as snowshoeing, there are plenty of interesting places to see. Skiing over to Arabba via the Podroi Pass is not to be missed. Arraba has the most blacks around the Sella Ronda circuit and from there, time permitting, Skiing on the Marmolda is not to be missed. From Arabba it takes around 40 mins to ski to the base cable car and then a further 2 cable cars to get to the top. The best known run is the Bellunese from Punta Rocca at 3300m down to Malga Ciapela, a vertical drop of 1800m and some 12km long - truly amazing and stunning scenery all the way. 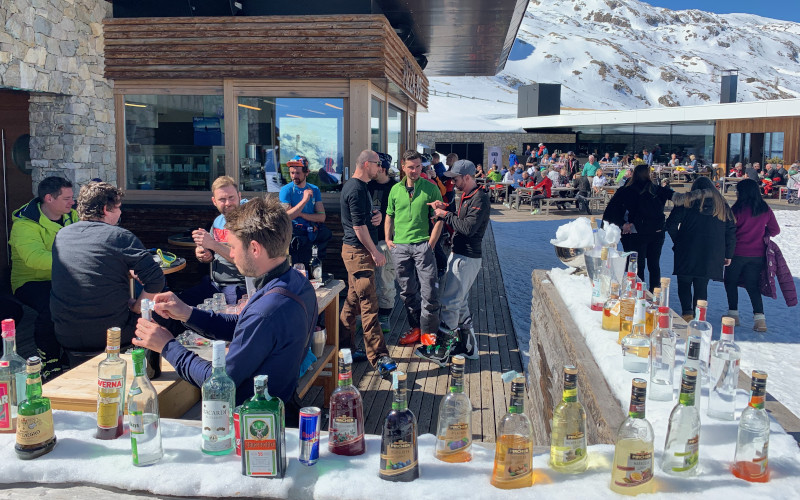 Our view on ski holidays in La Villa

We think La Villa is one of those ski resorts that are starting to get the recognition amongst international travellers that it thoroughly deserves. A fantastic resort in the heart of the spectacular Dolomites - full of charm and character. With its direct link in to Corvara, ski holidays in La Villa present some serious touring options for all levels of skier.

If you like La Villa, you may also want to look at Canzei in Val di Fassa.