Skiing in Breckenridge - it wasn't always a ski resort and back in 1859 when it was founded, it was a gold mining town. These days, its an ultra modern and well equipped ski and summer holiday resort. However, the Victorian styled shops and some of the accommodation is hard to miss especially on Main street.

Off the slopes, Brekenridge has plenty of entertainment night and day and nearly everything is within walking distance - anything that's not and you can catch the free buses.

There are around 80 bars and restaurants dotted around the resort although Main Street is where it all happens and keeps rocking until the early hours. 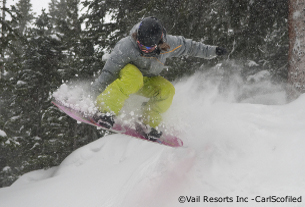 Ski holidays in Breckenridge - the ski area is over 4 inter-connected mountains - Peaks 7, 8, 9 and 10 in the Ten Mile Range of Summit County. In fact, there are some 2358 acres to explore with the terrain slightly biased towards the intermediate and advanced skier and boarder with only 15% of the 155 pistes catering for beginners. However, we think the best part about skiing in Breckenridge is the thrill of going exploring in to the unknown!

Given that the resort sits at 2926m you can bet your house that there will be snow - an average of 25 feet falls during a season. And, if by some act of God there is none, 565 acres are covered by snow-cannons. 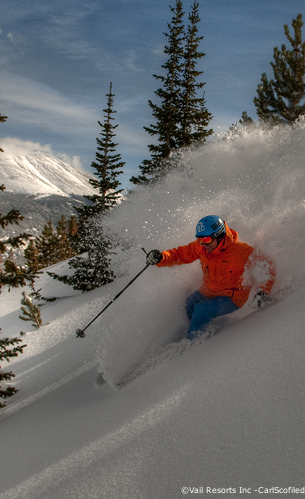 Given that only 15% of the terrain is for beginners, to get the most out of Breckenridge, quick progression off the beginner slopes is essential.

Fortunately, the ski schools are excellent and most beginners are cruising on the gentle blues on Peak 8 by the end of the week. To start with though, the roped off area at Peak 9 is where you will take your first "steps" on skis.

Around a third of the pistes are geared towards intermediate skiers. There is literally mile after mile of cruising on and off-piste, through trees and powder bowls. For steeper cruising, head to Peak 10 where its mostly advanced intermediate and expert.

Breckenridge has lots of black runs and some of the highest skiing in North America. The high Alpine bowls of Peaks 7 and 8, the steep tree trails on the North Face of Peak 9, and the mogul runs spilling off the sides of Peak 10 make up most of the expert terrain

The Imperial Express chairlift is the highest in North America and takes you up to 3962m at the top of Peak 8 giving access to the North Bowl and Arts Bowl on Peak 7 - both of which are for the hardcore!

Cross-country skiing is not really what Breckenridge is all about - there are 32km of trails. If this is your passion, you would be better off heading to the Austrian resort of Saalfelden.

Breckenridge is a mecca for snowboarders with 5 parks and 2 halfpipes but its also the fantastic terrain and powder bowls for surfing that add to it's reputation. Suitable for all levels, you will have the time of your life....

If you do not fancy skiing or the weather is just too bad to ski then there are various other activities in and around the resort... 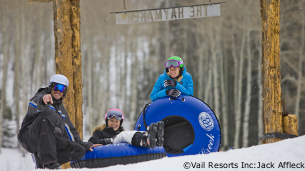 Breckenridge is an all year round resort with a population of around 3200. Summit County has nearly 24000 inhabitants so there is a reasonable amount of footfall passing through Breckenridge on a regular basis. In terms of where to stay, there is a good selection of hotels, private ski lodges and vacation rentals - in total, around 20,000 tourist beds. 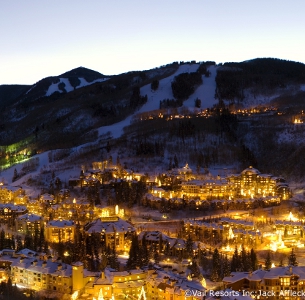 Our view on Breckenridge ski resort

With guaranteed snow, high altitude skiing, more trails and off-piste to explore than you could wish for plus an apres-ski scene that ranks as one of the best around, Breckenridge is a world class ski resort that has to be tried at least once!

If you like Breckenridge, you may also want to look at Chamonix in the French Alps.