Garmisch - Partenkirchen sits on the Austrian border, and is Germany's best known ski resort famous for it's spas and hosting the winter Olympics in 1936.

These days, Garmisch is a thriving international all year round destination offering superb winter and summer activities, top class accommodation and excellent facilities.

It is also fortunate to have Germany's highest mountain and only glacier on it's doorstep which sets it apart from all the other German ski resorts.

Being a spa resort, Garmisch has several top class spa hotels for relaxation and wellbeing - quite similar to Leukerbad in some respects although without the thermal waters.

If this is your first trip to Garmisch, you'll soon discover that ski holidays are all about combining the winter sports activities with relaxation and wellbeing. On the mountain, you have a choice of 2 areas...

With 40km of linked pistes spread over the Hausberg, Kreuzeck und Alpspitze mountains, this ski area is suitable for all levels but particularly beginners and early intermediates. The vertical goes from 2050m down to 700m and as you can imagine, the lower slopes are peppered with snow cannons.

Rising up to 3000m is Germany's highest peak - the Zugspitze is home to the Schneeferner glacier - the only one in Germany. Not a huge pisted ski area, just 22km, but what you do get is a feeling of being on top of the world.

From the summit, you can look on to Austria's highest peak, the Grossglockner at 3,798m and and a bit further south on to the Marmolada (3343m) where you can ski in resorts such as Arabba and Cortina. 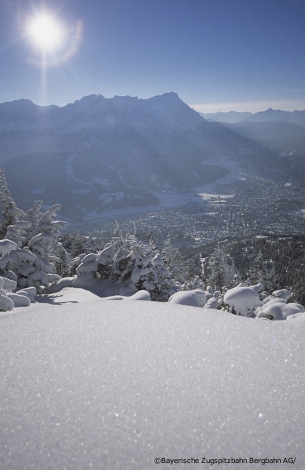 On the Hausberg mountain, the skiing starts at 1310m and is where beginners tend to take their lessons. It's also very popular with families as there is a Kinderland right next to the Hausberg lift station where toddlers learn to ski.

The final area of the Garmisch Classic is on the Alpspitze mountain. A winter wonderland high above Garmisch-Partenkirchen beyond the tree-line and ideal for intermediates.

Kreuzeck is famous for the Kandahar course - a black world cup piste. At 3km in length and with a vertical of 940m, its not for the feint hearted and only for the advanced skier.

There are 8 more blacks dotted around the Garmisch Classic areas and superb off-piste but at your own risk as there are no guided off-piste itineraries!

There is one snow park that is equipped for beginners and experts.

Things to see & do in Garmisch

If you don't fancy skiing or boarding, there are plenty of other activities to keep you busy including.....

The après-ski in Garmisch can be as lively or as relaxing as you want to make it with over 200 bars and restaurants to enjoy. Probably the best way to describe the après-ski is typical German with Bavarian style "knees up" evenings which gets everyone into a party mood.

Ski holidays Garmisch - a big reputation for being great fun on and off the piste. A few top tips we've picked up...

If you like skiing in Garmisch, you may also want to look at the resorts in the Zillertal Valley including.....