How to get to Villars-Gryon

How to get to Villars-Gryon

Located in the French-speaking part of Switzerland, Villars-Gryon is one of the closest Swiss mountain resorts to Geneva with easy access by car or public transport.

Airport transfers from Geneva to Villars takes around 1 hour. Even faster is flying in to Sion - it is such a short airport transfer from Sion to Villars that if you are looking for somewhere to go for a few days, then weekend ski holidays in Villars are a good option.

If driving, you need to get on to Highway A9, and take the exit for Aigle. Villars is then another 20 minutes drive up the mountain passing through Gryon first.

If you are coming by train, then the high speed TGV from Paris to Lausanne takes 3h 40mins followed by another hour to Villars. In winter, there is a direct train from Paris to Aigle (TGV des Neiges) then a 35min bus ride to Villars. 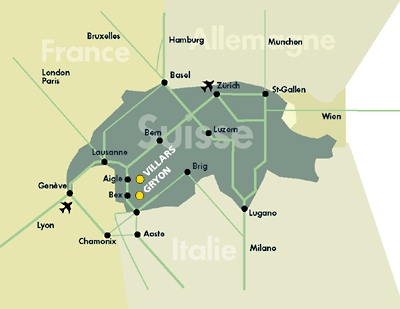